I was thrilled to be named the Good Funeral Award Celebrant of The Year 2018 last September.

Having been shortlisted alongside those Celebrants who I would considered more experienced, I was totally humbled and honoured to win the award. Despite me winning, I felt I represented a group of brilliant people who provide a unique service to celebrate the lives of unique people. Together, and alongside other Funeral Professionals we are all working to show the ultimate respect to those who have died. It means so much to have been nominated in the first place. Added to the endorsement by the judges, the kindness and respect shown from colleagues within the funeral service (who said such kind things when they knew I had been nominated), as well as my partner and friends has been amazing. I would not be where I am without the initial training and belief from Terri Shanks. Back in 2014 I was a very nervous newbie who entered the room and participated in the Funeral Celebrancy course. My respect and thanks to all at The Fellowship of Professional Celebrants and other Celebrants for their ongoing support. 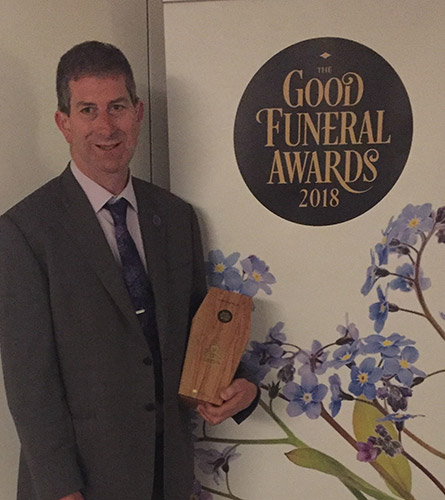 My Background My background is Nursing and Social Work but I had always had an interest in bereavement since my mother died in the 80s. I later trained as a Funeral Director.  When I found Celebrancy, all the skills, knowledge and experience I had gained along the way fell into one place. I am passionate about and love my role which I have been doing full time since April 2017.  Being entrusted to support families when they are most vulnerable is a responsibility I don't take lightly.  Meeting families for the first time is a pleasure. I love listening to their stories and have learned so much about the rich lives their loved ones have experienced. I have understood far more about real social history which taps into my love of history at school. My Work Then comes the creative part. Sitting in front of a blank computer screen to put a persons life into a narrative excites me. That creativity comes in all different shapes and forms from working with a theme. Like linking Abba hits to different parts of the persons life. Or taking the congregation on an imaginary road trip to the places the person had been.  Each ceremony must reflect the person and the biggest compliment (more than the award) is being asked 'How long have you known them?'  as people leave. Yes as a human being, I have made mistakes (like saying mammories instead of memories at a funeral.) I felt the blush from head to toes! But I always learn and hope I show ultimate respect for the Deceased person and their families. The funeral itself is team work.  Every funeral is different and being able to work alongside different Funeral Directors, teams and different crematoria staff is essential.  Together we create a funeral as if it the only one happening. My motivation is and will always be to serve the memory of those who have died and those they leave behind.  The Good Funeral Award received will always be treasured alongside the experiences and learning gained from Funeral Celebrancy. This is a service I am thrilled to be associated with. So I look forward to continuing on this journey. For Further Information, visit: www.davidmilesuk.com.